Salman Khan’s Tubelight has started on a slow way at the box office but still, the movie is maintaining its place on the silver screen. Finally, Tubelight film has crossed the magical mark of 100 crores. 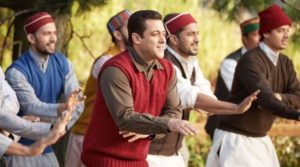 The film opens on the Day 1 with a 40 percent audience occupancy and made a reasonable collection of 21.15 crores. The same thing has been followed on Day 2 with the collection of 21.17 crores. On the first Sunday of Tubelight, the film has managed to earn 22.45 crores. After a decent growth on the third day, the film fails to lure the audience on the Day 4, which also was an Eid Festival day. The film has collected just 19.09 crores on the fourth day. As the film has already entered the weekdays and so the collections were ultimately lower than the holidays and weekends. On the Day 5 – Tubelight has managed to earn additional 12 crores. Now the day 6 collections are out now and it has just made an earning of 10 crores. So overall, the Box Office total of 6 days is 105.86 crores.

Yes, this also means that Tubelight film has entered the 100 crores mark on the sixth day. Interestingly, it is Salman Khan’s 11th 100 crores film in a consecutive manner. Though the collects are lower than his previous movies still it is getting a decent response at the Box Office. On the week 2, the film will also face a competition with Hollywood giant film Transformers: The Last Knight which is scheduled to hit the silver screen on June 30, 2017.

This year, there are only 5 films including Tubelight, which has entered into the 100 crores club. The first movie to enter the coveted 100 crores club was Shah Rukh Khan’s Raees, which was followed by Hrithik Roshan’s Kaabil. The third movie which entered this club was Akshay Kumar’s court drama Jolly LLB 2. The fourth film was Varun Dhawan and Alia Bhatt starring Badrinath Ki Dulhania. And the fifth one is Salman’s Tubelight.

Altogether, Tubelight still holds firm on the silver screen and the good collections are expected in the second week.

What are your thoughts about Tubelight movie collection? do let us know in the comments.