Comedy is a serious business and we have already seen that in March 2017 when we first heard about Kapil Sharma and Sunil Grover fight. Since then a lot has been changed in the comedy business especially on The Kapil Sharma Show. At the latest, Bharti Singh has joined the show with her boyfriend Harsh Limbachiyaa. 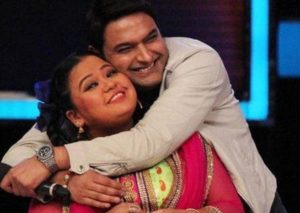 This is yet another big news in a week. Earlier this week we have seen Chandan Prabhakar entering the show again post Kapil-Sunil fight issue. Chandan says that they are grown ups and knows how to deal with the situations and sort our the differences. Well, Bharti Singh has always been associated with Krushna Abhishek with his show Comedy Nights Bachao but this time she has decided to be a part of Kapil’s show.

With the entrance of Bharti Singh in the show, there is a surety that the TRP will again back on the track. In last three past, The Kapil Sharma Show has been gone through a lot of trouble. Post the fight between Kapil and Sunil, the latter left the show. Soon, we have seen Chandan Prabhakar, Ali Asgar and Sugandha Mishra also left the show in the midway. Since then, a lot has been said and done about Kapil Sharma and his show.

There were even instances that The Kapil Sharma Show was out of the top-10 TRP list and there were dark clouds around the show. But now things seem a bit more stable thanks to the entry of Chandan and Bharti Singh.

Altogether, Kapil Sharma has already learned his lesson that without a team you can’t handle or run a show singlehandedly. We hope the show does well in the days to come.

What are your thoughts about this news story? do let us know in the comments section below.