Salman Khan is one of the biggest and the most popular star in the Bollywood filmdom. He is so big that films run on his name but unfortunately, his recent Tubelight fails to lit up. Due to the failure of Tubelight at the Box Office, Distributors faces a big loss in terms of earning. 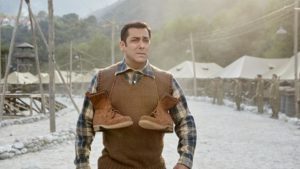 The Indian rights of the film have been sold to 132 crores but it hardly got an audience on the silver screens. The film is staggering with a collection of 120 crores at the Box Office in its third week. The movie will wind up its run by the end of this week. At one hand Producers makes a big profit from this movie but it has ultimately turned out a loss affair for the distributors and exhibitors.

It was earlier reported that some distributors were turn up to Salman Khan’s house in Mumbai and there were reports that he is agreed to pay over 50 crores. At the latest, it is again reported that, there is eventually a meeting happened on July 8, 2017 with the makers and distributors, which includes Salman Khan and his dad Salim Khan. It is heard that, Salman Khan is agree to compensate them but the actual monetery figures is being disclosed.
Ultimately, distibutors will have a sigh of relief as they won’t be in full loss situation. And it is important to compensate the distributors if they lost their movie through your movie. And that’s what Salman Khan did as he really don’t want any problems in distributions for his upcoming movies.

Altogether, Salman Khan’s stand on this is a brave one and every filmmakers or producers must follow this method to monetarily compensate distributors.