This question might be pinching you from last 1 week that, will Secret Superstar earn 1000 crores worldwide? Well, the answer is Yes to some extent. You will think it as a joke but this has a certain possibility the way Secret Superstar is running in China. 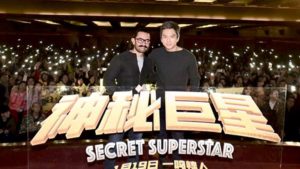 Made with a 15 crores budget, which is just over $ 2 million US dollars, Secret Superstar is now the most profitable Bollywood film. Before releasing in Taiwan and China, Secret Superstar has earned 80 crores gross collection lifetime in India. In the overseas market, it has earned 41 crores gross total. In Taiwan, Aamir Khan film released on November 24, 2017, and still it is running with over 7 crores collection. In China alone, Aamir’s film has collected 373 crores in 9 days. With this, the Secret Superstar worldwide total right now stands at 501 crores worldwide gross.

5 Worst Films Of Aamir Khan That Proves He Is Not Mr. Perfectionist

Well, Aamir Khan is a megastar in China now after Dangal, which has collected 1254 crores in the neighboring country alone. So, there are chances that it can collect more than the Chinese Distributors prediction of 623 crores lifetime. It may also cross another 249 crores if this film holds strong in the third and fourth week in China. Even if, Secret Superstar fell short of 1000 crores worldwide total after China box office completion. It still has many others countries to release yet, which will definitely take it the Secret Superstar total collection over 1000 crores.

If this will be achieved than, Secret Superstar will be the most profitable movie in India of all-time.