Sanjay Leela Bhansali film Padmaavat was surrounded into controversies before its release. In spite of all these troubles, Padmaavat not only released in a big way but also won audience heart. It has till now crossed 80 crores mark at the box office and the fourth day it will definitely cross 100 crores mark. 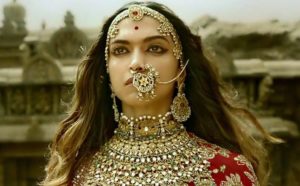 This kind of collections is unbelievable when there are no Khans attached to the film. Without having a mass hero and a controversy surrounding around it, this film has come out as a big winner. On the Paid Previews, it has collected 5 crores. On the day 1, it has earned 19 crores and the second day earning was 32 crores nett. The third-day collection is around 27 crores, which makes the total over 83 crores nett. It just needs 17 crores to enter into the 100 crores club.

Padmaavat will be the first 2018 Bollywood film to enter in the 100 crores club. The word of mouth publicity is very strong around this film and the negative publicity has achieved that feat. The making cost of this film is 200 crore, including promotions. It has to earn 200 crores for the break-even point. From here on, this film looks around 250 to 260 crores lifetime.

Altogether, Padmaavat movie is a rare gem that you can’t miss out this week.