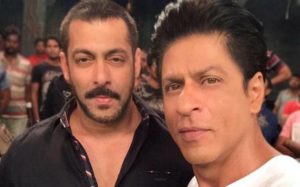 It is always a dream come true to see the Bollywood Industry’s biggest superstars together. And, the same has happened on the sets of SRK’s next. After Salman Khan arrived on Dwarf movie set, the makers had a talk with the Bajrangi Bhaijaan actor for the particular song. It is being heard that the song which will feature Salman and SRK will be choreographed by ace choreographer Remo D’Souza. This means that it would be more of like a peppy number featuring our very own Karan Arjun.

According to Mirror Report, “While Shah Rukh, who had been filming since morning, was in the middle of a shot, his visibly bulked up dost made his way to a nearby tent that was surrounded by security men. When SRK was headed to his vanity van after the shot was canned, he was informed about Salman’s presence, after which he went to meet his friend. The duo spent some time catching up. At around 4 pm, Rai joined in to explain the next shot to them. Half an hour later, the trio emerged from the tent to resume work. Shooting wrapped up around 9 pm but SRK and Salman stayed put at the studio, their conversation outlasting the day’s schedule.”

Directed by Aanand L Rai, the film will also star Anushka Sharma and Katrina Kaif in lead roles. The film is set to release by the end of 2018.

All we can see that it looks blissful to see both of them in the single frame. And the latest picture from the Dwarf sets says the whole story. Salman Khan and SRK looks good together in this picture.