One of the most awaited films of the year is Akshay Kumar’s Toilet: Ek Prem Katha and currently the promotions are going on a full swing. After surprising us with the first song Hans Mat Pagli, the makers are yet again to stir the heart with another romantic song Bakheda. 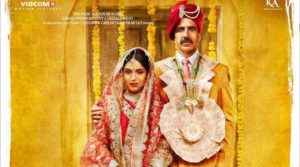 Read also: Dharmesh And Raghav Will Be A Part Of Salman Khan’s Dance Film

The song stars Akshay Kumar, who tries all his efforts to meet the lady love. On the other hand, Bhumi Pednekar also falls in love with the lead protagonist and wants to be with him. This song is beautifully crafted by the makers, with soulful voices of Sukhwinder Singh and Sunidhi Chauhan. The Lyrics of the song is being penned down by Garima Wahal and Siddharth Singh. This duo has also written the first song Hans Mat Pagli and also the story of the movie.

Talking about the movie, the trailer has already impressed the likes of cinemagoers, which also includes PM Narendra Modi. After seeing the trailer, Narendra Modi praises it and it is also heard that the movie will be tax-free in all BJP run states. This clearly means that the movie will not face any financial loss and it will surely turn out as a profitable one. Directed by Shree Narayan Singh, the film also stars Divyendu Sharma, Sudhir Pandey, Sana Khan and Anupam Kher. This will be the 20th time that Anupam Kher and Akshay Kumar are teaming with each other. The movie is slated to hit the silver screen on August 11, 2017.

Apart from this movie, Akshay Kumar also has three more movies lined up. He completed his work for Rajinikanth starring sci-fi film 2.0, where he is essaying a role of lead antagonist. And the other movie is Padman, which is a biopic film on Arunachalam Muruganantham story. He was the one, who use to make low-cost sanitary napkins for village women in rural areas. Post these two projects, Akshay Kumar’s will be seen in Reema Kagti’s Gold.

Altogether, Bakheda song is an impressive one and a must watch song for all the music lovers.

What are your thoughts about Toilet: Ek Prem Katha movie songs? Do let us know in the comments.