Salman Khan’s recent flick Tubelight seems to be out of spark in the second week. Currently, Salman Khan starrer movie has completed 13 days at the Box Office and the collection is still deteriorating. 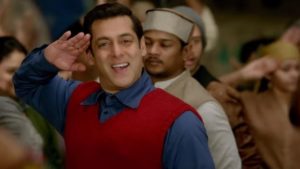 In Collection terms, Tubelight has collected 21.15 crores on the first day, till the first weekend it has collected over 63 crores. In just 6 days, it has crossed the magical 100 crores figure and the first-week collection was 106 crores.

Let me tell you the second-week collection of Tubelight movie in details. It has earned 2.25 crores on second Friday, on the 9th day it rakes another 3.25 crores. On the second Sunday, Tubelight collected 3.50 crores. After seeing a 70 percent drop in the second weekend. The film further steep down in the second Monday with an estimated collection of 1.10 crores, this is not all second Tuesday collection was even much low which is 80 lakhs. On the 13th day, Salman Khan movie has able to collect 70 lakhs in India, which makes the overall total to 118.46 crores.

Talking about the worldwide collection, Tubelight has able to cross 200 crores mark. The gross collection of Tubelight after 13 days is 165.86 crores in India. In the overseas market, Salman’s film has raked up 36.05 crores. In this way, the worldwide total of Tubelight is approximately standing at 201.91 crores.

Tubelight fails to surprise the audience and now it will face a tough competition in the third week with Hindi film Mom and Hollywood film Spider-man: Homecoming. In such a scenario, Tubelight will surely wash out from the theaters and end up its lifetime run somewhere about 120 crores in India. In the worldwide front, Tubelight film will hardly touch 210 crores lifetime.

Altogether, Tubelight collections are certainly disappointing the makers and we hope that Tiger Zinda Hai shouldn’t follow the same trend.

What are your thoughts about Salman’s Tubelight worldwide collection of 13 days? do let us know in the comments section below.