Aamir Khan’s Secret Superstar has completed 8 days at the box office. Released on 19th January 2018, this film has turned out to be the biggest entertainer for the Chinese audience. 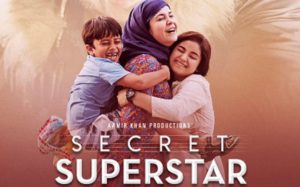 Currently, Aamir Khan is in China, where he is greeting his fans. He has visited Beijing and Shanghai for the Secret Superstar film promotion. The director Advait Chandan also accompanied him along with actress Zaira Wasim.

On the 8th day, Secret Superstar lands at number 2 position in terms of box office collection in China. The reason is new Hollywood release in China, Maze Runner: The Death Cure which has earned 56.09 crores ($ 8.81 million) on its day 1. Well, Secret Superstar gave it a tough fight and will soon overpower the Maze Runner.

Altogether, Secret Superstar received a great welcome from Chinese audience and it may have a chance to cross 600 crores to 650 crores gross collection lifetime.