Padmaavat movie has completed its second day at the box office where it has seen an excellent growth in the collections. As compared to the first day, the audience occupancy of day 2 is much better and it is expected to cross over 30 crores. 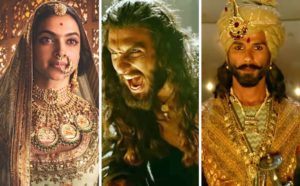 As it is a Republic Day, this film has witnessed a tremendous growth on the second day. But the only problem is that it still not get released in Gujarat, Rajasthan and Madhya Pradesh, due to protests. Still, it can easily earn around 29 to 30 crores on the day 2. The first-day collection was 24 crores, including Paid Previews of 5 crores. The second-day collection will take this film over 50 crores nett collection.

If this film had been released normally, then its collection will be around 35 to 37 crores on Day 2. It has lost its screens around 600 to 700 due to ban in several states, which has cost it 7-8 crores loss on the first day. The second-day loss will be around 8-9 crores.

Made with a 200 crores budget, the film will easily recover that cost by the end of the second week. But it will not last long as it will face a stiff clash with Aiyaary and Padman on February 9. Anyways, Padmaavat has a long way to go to recover its cost.