After Secret Superstar and Bajrangi Bhaijaan, there is one more Hindi film that is slated to hit the Chinese Screens is Hindi Medium. Released in 2017, Hindi Medium was being made with around 20 crores budget and earned 69 crores at the box office. Now, the makers of Hindi Medium has sent their film for the Chinese Censorship, where it will be passed soon. 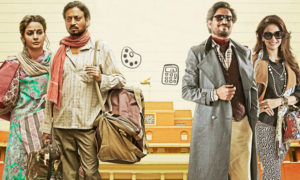 It is expected that Hindi Medium is slated to hit the theaters in China in March 2018. Interestingly, Salman Khan’s Bajrangi Bhaijaan is also confirmed for its release on March 2, 2018, in China. That means, two Indian movies might clash at the Chinese box office in March 2018, which is a good news for Indian films.

According to Chinese Film Market Tracker, Gavin Feng tweet, “this film Indian movie Hindi Medium might open in March in China if things go south. It is waiting to pass the censorship(should be finished soon). ”

So, there is no official release date announced yet but if it gets cleared by the Censor Board that it has all the good chances to release in March 2018. Meanwhile, Secret Superstar is running successfully in China with a 324 crores gross collection in 8 days.

Altogether, Irrfan Khan and Deepak Dobriayal starring Hindi Medium might be another big hit of Hindi Cinema in China after Dangal and Secret Superstar.