This is one of the biggest news of the day as Salman Khan was the lead actor in Judwaa movie back in 1997. Directed by Varun Dhawan’s dad David Dhawan, Salman Khan essayed a double role back then. In this upcoming sequel of Judwaa, Salman Khan is agreed to do a cameo role and this is pretty exciting.

Read also: Dharmesh And Raghav Will Be A Part Of Salman Khan’s Dance Film 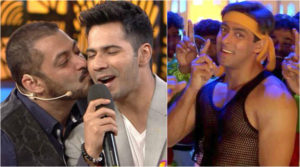 Judwaa 2 shooting is currently on the last leg and the movie stars Varun in dual avatars with Bollywood beauties Taapsee Pannu and Jacqueline Fernandez. On Saturday Night, Varun, Taapsee, and Salman Khan have shared their first picture together from the sets of Judwaa 2.

At first, Varun Dhawan took to Twitter and wrote, “#Judwaa2 just got bigger. The man @BeingSalmanKhan is in it now.” Soon after that Taapsee also followed the same by tweeting, “And it happened! Done with my talkie portion for #Judwaa2 #SuperTeam.”

And the most beautiful praise comes from Salman Khan’s Kick co-star Jacqueline, who is also an important part of Judwaa 2. She captioned the picture on Instagram saying, “A picture may say a thousand words but I wouldn’t be able to upload enough to describe today! Around my favorite people who’ve been with me and supported me in my Bollywood journey since day 1! @beingsalmankhan @nadiadwalagrandson #daviddhawan @varundvn @kamera002 @taapsee thanks for being an awesome co-star to work with!! @beingsalmankhan thanks for making our film so much more special today!!! Will always cherish these #judwaa2 memories.”

The first part was full of comedy starring Salman along with Shakti Kapoor, Anupam Kher, Satish Shah, Karisma Kapoor and Rambha. It was a full-on comedy entertainer and was a box office hit. It will surely be a nostalgic feeling for Salman to be back in the Judwaa zone again for the very own director David Dhawan.

As per the early reports, Judwaa 2 is slated to hit the theaters on September 29, 2017.

Altogether, this group picture of Judwaa 2 along with Salman Khan is incredible and heart-touching.

What are your thoughts about this big news? do let us know in the comments.