Raid movie is about to complete its third week in India and overseas. It has done incredible performance so far and now it has crossed 150 crores worldwide. 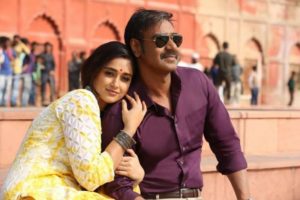 Yes, you read it right, Ajay Devgn starring Raid movie is still running in theaters across the world. It was released on March 16, 2018 in 3400 screens in India and 369 screens in overseas. In first week, it has collected 63.05 crores in India. The second week earning was around 27 crores. On 19th day, it has collection around 68 lakhs. It has made a total collection around 98.51 crores nett. The gross collection of Raid movie is 127 crores in India.

In overseas market, Raid movie has collected 23 crores gross, which takes the total collection around 150.40 crores. This is a good collection for Raid movie, which is all set to cross 100 crores in India by the end of third week.

Raid movie is now facing a tough clash with new releases like Hichki and Baaghi 2. In front of these two movies, Raid is struggling to earn big money in its third week. It is expected that, Raid will end its lifetime collection around 102 to 103 crores in India.

Directed by Rajkumar Gupta, Raid movie also stars Saurabh Shukla and Ileana D’cruz in key roles. Altogether, Raid movie has a profitable run at the box office and is set to be a big hit.