Hindi Medium movie has released in China on April 4, 2018 and it has done an incredible collection. Made with around 20 crores budget, Hindi Medium is well received by the Chinese audience. 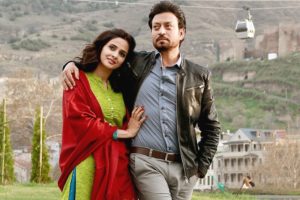 During the paid previews on March 31 in China, audience has connected easily with this film. After watching this film, many audience have given it good rating on Chinese ticket booking site maoyan.com. Chinese audience says that their country has same sort of situation in terms of studies and society. At Maoyan, this film has got 9.3 star ratings, which is a rare feat to achieve.

In India, Hindi Medium has collected 69 cross nett and made over three fold profit. This film had a strong run of over 1 month in India at the box office. The same kind of marathon run is expected from this film in China, which is very much possible.

Talking about collections in India, this film has collected $ 3.34 million – 21.71 crores. It has got over 44000 shows and over 5 lakhs admissions on its first day.

Altogether, Hindi Medium is all set to be a blockbuster hit in China.