Padman movie has completed 5 glorious days at the box office. It has performed amazingly in the first weekend and currently holds its pace in its weekdays. 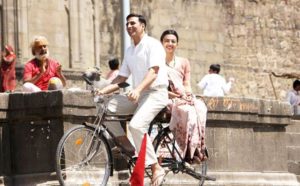 Till the fourth day, Padman has collected 45.92 crores at the box office. On the 5th day, it has earned a sum of 6.12 crores and makes a total of 52.04 crores. Made with a budget of 20 crores, this movie is already in profit now. Released in 3350 screens worldwide, Padman is getting a good response from the audience.

Recently, Padman was also released in Russia, on the same day as its Indian release. There are also rumors that it might get a release in China in 2019 but there are no confirmations yet. Based on the life of Arunachalam Muruganantham, this film talks about the sanitary pads for women.

Padman is a social-relevant film, still, it didn’t get tax-free status in India. This film is being helmed by R Balki, who has earlier directed movies like Cheeni Kum and Shamitabh. Padman might not be the best of Akshay’s work but this film deserves an applause for its strong story.

Akshay Kumar will next be seen in 2.0, Gold, Housefull 4 and Kesari movie in the comedy months.