Bigg Boss 11 is witnessing the last nomination of the season. In this nomination special episode, Hina gets irratated to see the uncleanliness at a place where Shilpa do her make up. She even tells this problem to Vikas, who says Shilpa is a good person, may be she has some cleanliness issues. 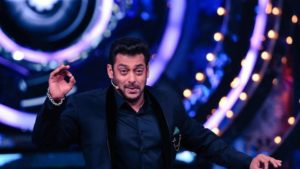 On the Day 91 night, Puneesh and Shilpa had a big conversation about other contestants in the house. Puneesh says that he still hiding his real identity in the house and he has much experienced than Priyank and Vikas.

On the next morning Day 92, Bigg Boss told every contestant to stand at a place, which ranked from 1 to 7. Bigg Boss even asked they to stand at the proper place by talking each other. Hina Khan Says that she deserves To Be at number one position or Shilpa Shinde. Akash says that he is an entertainer and he even deserves number one spot.

Till now, all the seven contestants are talking eachother to make their place as per their popularity. Even, Luv says that this show has made him popular and he even deserves to be in the top 3.

After discussions, Akash placed himself at number one, followed by Puneesh on Number two, Luv on third, Shilpa on fourth, Hina on fifth and Vikas on sixth. Interestingly, Bigg Boss announced that Apart from Akash and Puneesh, all others are nominated for this week. That means, Shilpa, Vikas, Hina and Luv are in this week’s nominations.

After the Bigg Boss announcement of nominations, Akash and Puneesh were too happy and excited. They were teasing other housemates and thanked Bigg Boss 11. As, they are confirmed for the Bigg Boss finale.

Altogether, It was an interesting semi finale week of Bigg Boss 11.