Ayushmann Khurrana, Rajkumar Rao and Kriti Sanon starring romantic film Bareilly Ki Barfi is doing great business at the box office. At the latest, the three-day box office collection is out now, which is double than the first day. 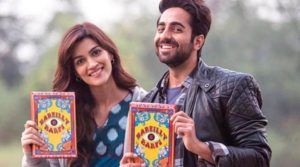 On the very first day, Bareilly Ki Barfi film has collected only 2.42 crores, which was quite low as per the expectations. Released in over 1200 screens and made with a budget of 23 crores, everyone thought that it would start with a bag. But, the film fails to live up to the expectations. Well, the second was full of relief for the Bareilly Ki Barfi makers as the film has seen good growth on the second day. It has collected 3.45 crores on the day 2. The third and the final day collection is 5 crores, which is certainly surprising.

If we compare the first day and the third-day collection of Bareilly Ki Barfi than it is quite clear that audience liked this movie. Directed by Ashwiny Iyer Tiwari directorial film has done great at the cinema halls. She has earlier helmed Nil Battey Sanatta, which was also a good movie.

After a long long time, Bollywood is witnessing some growth in collections and some good movies. We just wish that Bareilly Ki Barfi movie will come out as a hit film by the end of its lifetime run.

What are your thoughts about Bareilly Ki Barfi box office collection? Do let us know in the comments.