Ashwiny Iyer Tiwari’s directorial film Bareilly Ki Barfi creating positive vibes among the audience. Released this Friday, this film opens in a slow way at the box office but it is picking up well on the First Saturday. At the latest, Bareilly Ki Barfi Second day box office collection is out now and it shows a great jump in collections. 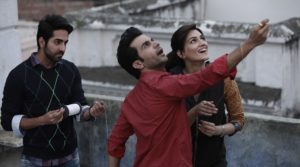 On the very first day, Bareilly Ki Barfi has able to collect 2.42 crores, with a screen count of 1200. Well, the positive word of a mouth publicity has helped this movie to flourish on the Day 2. Even film critics lauded this piece of cinema by giving favorable reviews. On the second day, this film was able to collect 3.85 crores. With that, the overall total becomes 6.27 crores.

This is Ashwiny Iyer Tiwari’s second film after her critically acclaimed film Nil Battey Sanatta. Her stories are mostly revolves around rural side rather than an urban drama. This film has been written by her husband Nitesh Tiwari, who has earlier helmed Dangal film.

This film revolves around a small town girl Bitti (Kriti Sanon), who falls in love with a book author Pritam Vidrohi (Rajkumar Rao), but interestingly, the book was written by Chirag Dubey (Ayushmann Khurrana), who hides his real identity. So, how things get twisted in this love story is what follows the whole film.

Altogether, Ashwiny Iyer Tiwari’s Bareilly Ki Barfi is a good film and can easily recover its budget, which is 23 crores.

What are your thoughts about Bareilly Ki Barfi box office collection? Do let us know in the comments.