Bajrangi Bhaijaan has completed 26 days at the box office and soon it will complete its first month in China. In such a long period in China, Salman Khan film remains stable and surprised other big releases, especially the Hollywood movies. 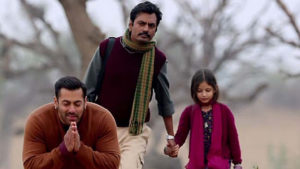 Released in almost 3 years after its Indian release, Bajrangi Bhaijaan has collected $ 18.16 million – 118.08 crores. It has earned 84 crores in the second week and the third-week collection was around 52 crores. Until the third week, the total collection was $ 38.79 million – 252.23 crores.

Altogether, Bajrangi Bhaijaan is all set to end its lifetime run in China on a strong note.