Tubelight Film is one of those films that falls miserably on the silver screen in 2017. It started on an average note at the Box Office and now it is struggling to make even few crores collection. At the latest, Tubelight eight day collection is out now. 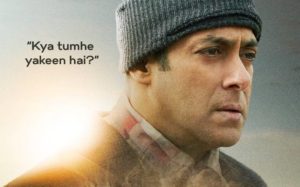 Talking about the Tubelight film collection, it has collected just 3 crores on the day 8 and makes the total to 109.86 crores. Even the overseas collections are average and make the worldwide total to 197 crores. This means that on the day 7, Tubelight will be there in the 200 crores club worldwide.

Directed by Kabir Khan, the film talks about the protagonist Laxman aka Tubelight, who has a hard life since childhood. The trouble comes in his kitty when his younger brother Bharat Bhist joins the Indian army and leave his hometown. It was that particular time when Salman Khan realises that he can do anything if he believes in his hope. The film is a remake of Hollywood film Little Boy.

Altogether, the film has completely washout from the silver screens majorly in the single screen theaters. It looks like the film won’t able to hold it until the third week in the theaters.

What are your thoughts about Tubelight Day 8 collections? do let us know in the comments.