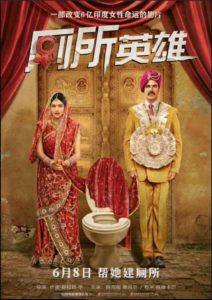 Directed by Shree Narayan Singh, this film was released in India on August 11, 2017 and went on to cross over 134 crores. It was a superhit film starring Bollywood actor Akshay Kumar and Bhumi Pednekar. It talks about the toilet problem in India, especially for village women. As they have to go out in the field for Toilet. Even this film highlights the hygiene and sanitation problem in India.

The Chinese equivalent to IMDB, movie.douban.com where the release date of Toilet: Ek Prem Katha is clearly mentioned. This is the 5th consecutive Indian film releasing in China in 2018 after Secret Superstar, Bajrangi Bhaijaan, Hindi Medium, and Baahubali 2.

The content of this film is very strong but there is no time for promotions in China. As it is releasing in another 1 week on June 8. Till now, all Indian releases in 2018 have performed well in China and this film will also have a great run in China. As both the countries have similar type of audience and our culture is also very much same.