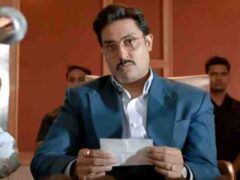 Ajay Devgn starring Raid movie is all set to hit the theaters on Friday. At the latest, Raid movie advance booking has started across India and overseas. It is the… Read more »