The Biggest Bollywood hit film Dangal is all set to make its way in Japan on April 6, 2018. Yes, this film is set to release in Japan and it… Read more »

No one had a thought that Secret Superstar can even beat Tiger Zinda Hai and Dhoom 3 worldwide lifetime collection records in dreams. But, that’s a reality of the day,… Read more »

Tiger Zinda Hai has broken several big records in the past but this new record is something very special. It’s because Salman Khan’s action film has beaten Dhoom 3 worldwide… Read more » 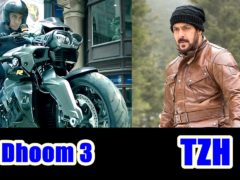 Records are meant to be broken, but breaking a big record of Dhoom 3 collections in just 11 days is a big thing. Yes, that has been actully done by… Read more »