Made with a budget of 15 crores, Secret Superstar has turned out to be the most profitable film of all-time. It has grossed $12.5 million (80 crores) in India and earned 41 crores in its first phase in overseas. 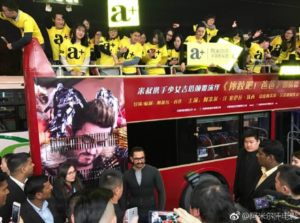 Soon, this film released in Turkey and Taiwan and the overseas total went to 48 crores in the second phase. The third phase overseas collection includes China, where it has collected $32.26 million (206 crores) gross. With this, the worldwide collection of Secret Superstar now stands at 334 crores.

Secret Superstar has also beaten the worldwide lifetime collection record of Golmaal Again, which has earned 309 crores gross. It is now the number third movie in Bollywood in terms of the highest earning movie.

Directed by Advait Chandan, Secret Superstar could easily earn over 500 crores gross collection in China, that will make the worldwide total over 600 crores. In that scenario, it will become the highest earning Bollywood movie in 2017 in terms of worldwide.

Meanwhile, Aamir Khan has reached China on January 22, 2018. He promoted his film in Shanghai. Today he will visit Beijing to promote the film. He is on a three-day tour of China. His last Dangal also grossed 1254 crores gross alone in China. He is currently the most popular actor in China.

Altogether, Secret Superstar is a beautiful movie to which Chinese audience has connected emotionally.