Aamir Khan starring Secret Superstar has raking a big moolah at the box office in China, since its release on January 19, 2018. Being a small budget movie, no one had a thought that it will cross 400 crores in just 10 days. 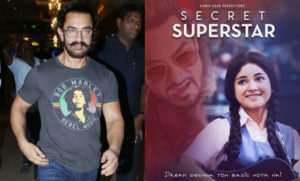 On the 11th day, it will easily break the worldwide collection record of Tiger Zinda Hai, which now stands with a total of 559 crores after 37 days. Advait Chandan’s directorial movie Secret Superstar has performed better than Hollywood release Maze Runner: The Death Cure, which has only earned $ 6.06 million (38.53 crores) on its third day in China.

Secret Superstar will continue its strong run in the second weekdays. From here on, the lifetime collection of this film looks beyond 700 crores in China alone. The popularity of Aamir Khan is growing in China tremendously and that has helped this movie in a big way.

Altogether, Secret Superstar is all set for a long run of over 1 months in the Chinese market.