Well, a lot has been happening in the B-town and that too during this lockdown phase. It is being crystal clear that, theaters won’t get open till September 2020 and what’s better to release their films on OTT plaforms like Netflix, Amazon Prime or Disney Hotstar etc. As per the latest report, a source claims that, the deal has been cracked between the producers of Laxmmi Bomb and Disney Hotstar members and they are on a term to release the film in June 2020 on their OTT Platform. 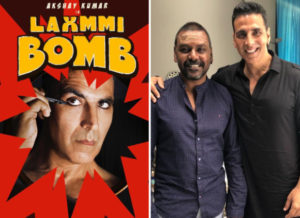 As per a source, Producers Akshay Kumar, Tusshar Kapoor and Foxstar Studios’ Vijay Singh had a conversation with Disney Hotstar members for almost three weeks and the deal has been finalised on May 4, 2020. The report further escalate that, the makers has sold the film for 90 to 100 crores for Digital and Satellite rights.

Meanwhile, Director Raghava Lawrence is busy in the post production process of the film and he is currently in Hyderabad. Even, Akshay Kumar will send his dubbed voice digitally, so that it can be used in the editing table.

Originally, Laxmmi Bomb shooting has been completed by November 2019. Some parts of the film shoot took place in February 2020 and now only few things are remaining that could be completed in another one month.

Now the biggest question is, will Laxmmi Bomb release on OTT platform in June or will it be delayed for another few months. But it is very clear that, Laxmmi Bomb may not get theatrical release in such a situation.