Kanadda star Yash is all set to surprise Indian and overseas audience with his magnum opus KGF. It is touted to be the most costliest Kanadda film of all time and it is based on Kolar Gold Fields (KGF).

It stars Yash along with leading ladies Srinidhi Shetty, and Ramya Krishnan. This film is set in the 70’s and 80’s era and it is a periodic drama. According to bookmyshow synopsis, KGF narattes the 17000-year-old history of oppressed waging war against the oppressors. Interestingly, this film is being made with 2 parts. The first part is set to release on December 21, 2018 in five languages Kannada, Tamil, Telugu, Malayalam and Hindi. It would be the first Kannada Cinema film to release in 5 languages. Apart from this, this film will also be dubbed in Chinese and Japanese. 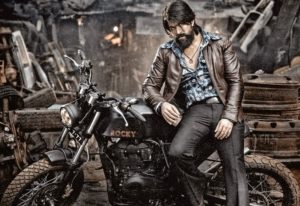 In the first film, Kolar Gold Fields Part 1 – the main hero of the film leads a battle against the oppressors. The teaser of KGF was released on the Yash birthday and the KGF trailer is expected to release on October 14, 2018. This film will distributed in Hindi version by Excel Entertainment led by Ritesh Sidwani and Farhan Akhtar. KGF will clash with SRK’s Zero movie.