Two big films releasing in India at the same day, one is Rajinikanth starring Kaala and the other one is Jurassic World: Fallen Kingdom. Both the films have some good and bad points will impact in their overall collections in India. 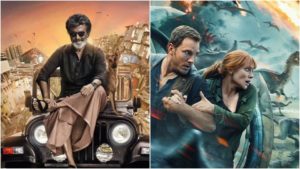 The good thing about Jurassic World: Fallen Kingdom is, it is a franchise film and has a legacy to it. As it is an adventurous film, so it can be watched by kids and their families. It will impact Kaala in India, especially in North Indian Circuits Mumbai, Central Bearer, Punjab, Haryana, Bihar and UP. This film will also be released in South states in regional languages but due to Kaala, it won’t flourish too much at box office.

On the other hand, Kaala has already got 90% advance booking for the first day shows in Chennai. As per the reports, this film will open around 40-45 crores on day 1 in India and 75-80 crores gross worldwide. Though, Kaala movie faced problems in Karnataka but ultimately it got released. People are still comparing Kaala with his 2016 film Kabali, which did decent business at the box office.

Interestingly, Jurassic World has collected 150 crores gross collection in India in 2015. In that sense, the sequel will surely be scoring over 100 crores gross in India if met with positive response. On the other hand, Kaala will be heavily dependent on Rajinikanth and Nana Patekar. So, if the story of Kaala is exciting that Kaala will have the upper hand at the box office battle.