Rajinikanth starring Kaala movie has completed 11 days at the box office on Sunday, as it was released on June 7, 2018. This film met with mixed response in India and overseas and considered as an average film. 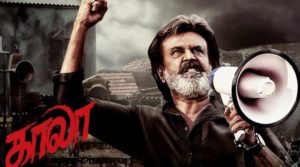 Critics gave mixed response to this film but it was a good film with a strong storyline. The face-off between Rajinikanth and Nana Patekar was a treat to fans. Well, it has collected 97.90 crore gross in India. It has earned 49.17 crore / $7.28 million in overseas market. The worldwide collection of Kaala is 147.07 crore.

Directed by Pa. Ranjith, this film also stars Easwari Rao, Huma Qureshi, Anjali Patil and many more. It has collected 52.02 crores gross in Tamilnadu till Second weekend. It has earned 13.50 crores in Andra Pradesh / Nizam circuit. It has also collected 12.55 crores in Karnataka, 6.55 crores in Kerala, and 12.20 crores in North India.

Rajinikanth’s last film Kabali with the director Pa. Ranjith met with the same kind of response at the box office.