2018 will be a year of debuts for many star kids, especially Ishaan Khatter, Janhvi Kapoor and Sara Ali Khan. Well, we are talking here about Sara’s first film Kedarnath as we are focused here on Ishaan and Janhvi starring Dhadak. It’s an official remake of 2016 Marathi film Sairat. At the latest, the shooting of this film started in Rajasthan. 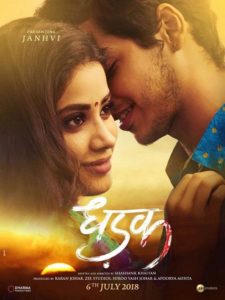 The makers have shared the first picture of the clapperboard along with the two leading actors. This film is backed by Karan Johar’s Dharma Productions and will be directed by Shashank Khaitan.

Talking about this film, Shashank said to a leading daily, “The basic premise is of differences in caste, honor killing and what it means to survive in that world and I feel that is the conflict that is alive all across India, you will hear stories like that. So in that sense, the basic premise (of Dhadak and Sairat) is same. But there are variations. My story is based on another setup… It is (set) in Rajasthan. It comes with its own challenges, conflicts, and style of a love story.”

Watch also: Have A Great December Month Ahead Friends 2017