Saif Ali Khan’s beautiful daughter Sara Ali Khan is finally going to face the camera with her debut project Kedarnath. Recently, we were aware of the pairing of Sushant and Sara but we weren’t sure about the movie name or even the genre. 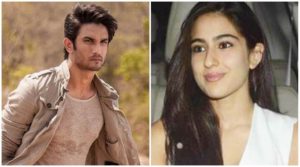 Well, it would be a romantic movie starring the duo and it is being titled as Kedarnath. By looking at the title name, it seems like a small-town love story. Anyways, assuming about the story of the movie is too early. The movie is being produced by KriArj Entertainment along with Balaji Motion Pictures.

Talking about the project, Prerna Arora of KriArj Entertainment said, “I am really thrilled and excited to be working and collaborating with Abhishek Kapoor for Kedarnath. And extremely happy to have Sushant Singh Rajput and Sara Ali Khan on board for this project.”

This quote is enough to clear the air about Sara Ali Khan’s debut movie. Earlier, it was reported that she will be making her debut with Student Of The Year 2 along with Disha Patani and Tiger Shroff. But it is being said that it was two heroines based project so she was reluctant to do. This is not all, there was also a news that she might star with Hrithik Roshan in Karan Malhotra’s next. Well, all the rumors have now dusted away as she is finally making her debut with Kedarnath.

Interestingly, the movie is being helmed by Abhishek Kapoor, who has directed Sushant Singh Rajput for the first time in Kai Po Che. Sushant’s last project was a big flop and now he has to buck up and gave a hit film like MS Dhoni: The Untold Story, which was 100 crores grosser and termed as a superhit film.

Altogether, Sushant and Sara will look good together and this would certainly a special project for Saif’s daughter.