One of the biggest entertainers of 2016, Dangal has finally achieved a big deal at the worldwide scale. Made on a meager budget of just 70 crores it has now earned 2000 crores worldwide. This achievement has been possible only because of the Chinese collection which is over 1200 crores gross. 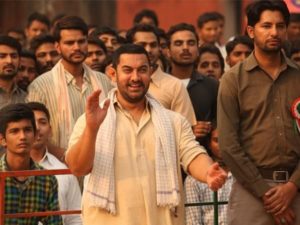 Released on December 23, 2016, Dangal has gone on to become the highest earning Indian movie with a nett collection of 387 crores. It has missed the 400 crores mark but still, it had already beaten the biggies in Bollywood like PK, Sultan, Bhajrangi Bhaijaan etc. It was later released in Taiwan on March 24, 2017, and there it has run over 3 months and tills now made a collection of over 41 crores gross.

Well, even Dangal was released in China on May 5, 2017. And no one had a thought that it will click with the Chinese audience. In the first three days, Dangal went on to cross 100 crores gross in China. In the first week, the collection was good as compared to the makers’ expectations. Well, due to immense word of a mouth publicity in China, Dangal has raked double collection in the second week. Since then, there was no stopping back to Dangal in China.

Until June 26, 2017, it has completed 53 days in China and collected 1216 crores gross collection. In a worldwide scale, it has now reached to 2000 crores worldwide. With this, it has become the first Indian film to cross 2000 crores worldwide. Released in over 7000 screens in China, the film was watched by over 5 crores Chinese people till now. Even the Chinese President Xi Jinping has watched Dangal movie and praised it.

Altogether, Dangal movie has made every Indian Proud by winning hearts of millions of people and crossing 2000 crores worldwide.

What are your thoughts about Dangal Worldwide Collection? do let us know in the comments.