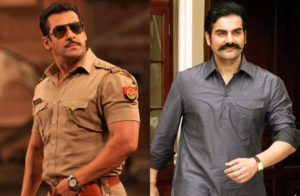 When a media asked him about Dabangg 3, he clearly said, “Yes, we have started scripting the film and I think, we will start shooting Dabangg 3 by the middle of the next year.”

Dabangg was released in 2010 and it also marked the debut of Sonakshi Sinha in Bollywood. Two years later, Dabangg 2 got released which also start the same lead actors. Well, Dabangg 3 is now confirmed but the star cast is still not decided.

In an upcoming film Tera Intezaar, Arbaaz is sharing the screen space with Babydoll Sunny Leone. Media also asked Arbaaz that will he cast Sunny in Dabangg 3, he said, “Yes, why not? And why would she be a Munni, we can cast her for something different, but for that, we have to finalize something.”

Talking about working with Sunny in Tera Intezaar, he said, “One of the reasons I did the film, was to spend some time with Sunny. She is wonderful and we had a great time shooting in abroad.” Arbaaz also indicated that he might go to Bigg Boss to promote his next.

Altogether, Arbaaz Khan has made the day of all Salman Khan fans who wishes to see him soon in Dabangg 3.