It’s a big thing when a film runs for over a month and now Tiger Zinda Hai has already completed 40 days. Surprisingly, Salman Khan’s action film collection was much better in the 6th week till now as compared to the fourth and fifth week. As, it was a mere drop in the earnings due to the ban on Padmaavat movie in Rajasthan, Gujarat and Madhya Pradesh. In these three big states, Tiger Zinda Hai is still running strongly, without a clash. 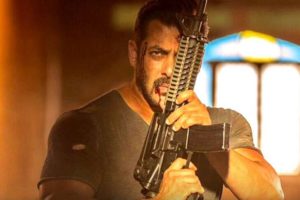 On the day 40, it has earned 21 lakhs, which takes the total to 337.77 crores. It is now just 3 crores away to break the lifetime collections of PK, which stands with a total of 340.84 crores. If TZH ever wants to break this record, that it has to earn consistently for another two days. Then, it needs a big collection of over 1 crores in the seventh weekend. Then, it can break PK collection by the end of the 52nd day or it is impossible.

Tiger Zinda Hai is one of the most costliest Bollywood action film, which has won the best action award in Filmfare. Directed by Ali Abbas Zafar, this film stars Salman along with Angad Bedi, Paresh Rawal and Katrina Kaif in key roles.

Altogether, Tiger Zinda Hai is a mass entertainer film, which is now the third biggest Bollywood hits of all-time.