Thank God! Salman Khan has delivered a beautiful song, that he has sung and also directed. It is one of the cheapest song in terms of money as said by Bhaijaan himself. The song features Salman’s Kick movie actress Jacqueline Fernandez. Both of them has set the screens on fire and thanks to the team who made this beautiful rendition. 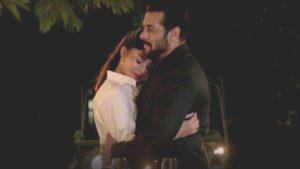 The song has been written by Shabbir Ahmed, composed by Ajay Bhatia. The song has been choreographed by Saajan Singh. This song is better than Selfish song that Bhaijaan sung in Race 3 movie.

It is good that Salman Khan is entertaining his fans amidst lockdown situation. Interestingly, the song has been completely shot in his Panvel based farmhouse, where he is staying with Jacqueline, Waluscha De Sousa and many others.

Let me tell you straight forward, this song reminds me of Dil Diyan Gallan song, which also featured Salman Khan’s love interest Katrina Kaif. I am damn excited to see Salman and Jacqueline soon in Kick 2 movie, which could be another blockbuster. No, I won’t mention Race 3 here, which was a disaster at the box office.

If you haven’t heard the song yet, watch Tere Bina Song right here: