Sonu Ke Titu Ki Sweety movie, which released on this Friday, is all set to become a superhit film. Made with around 25 to 30 crores budget, this romantic-drama has already crossed 30 crores in four days. 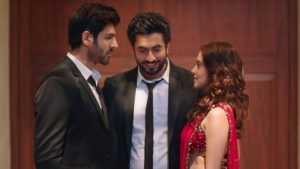 Well, the overseas collections are also positive, where it has collected 4.74 crores in three days. It was released overseas on 275 screens and did great business in USA, UAE, and Pakistan. The worldwide screen count of this romantic film is 1925 screens.

Directed by Luv Ranjan, this film stars Kartik Aaryan, Sunny Singh and Nushrat Bharucha in key roles. The supporting roles were played by Alok Nath, Ishita Raj Sharma, and Virendra Saxena. It is the fourth collaboration between Luv and Karthik with Sonu Ke Titu Ki Sweety.