Ajay Devgn has the busy year 2018, where a series of his big films releasing. One of his latest releases is Raid movie, which is set to release on March 16, 2018. Now the question is, what will be its first-day box office collection? 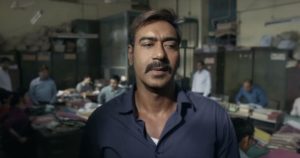 Frankly speaking, Raid has a powerful story, which hasn’t been explored in Bollywood so far. Conducting a Raid is one of the most difficult things done by Income Tax Officers. And for the first time, it has been showcased in a proper way in Bollywood.

If you were thinking that Akshay Kumar’s Special 26 is also based on Raid process. Yes, you are right at some point, but this film will explain you in detail about the life of Income Tax officer’s who conducted the longest running raid in the history of India.

By looking at the strong buzz of Raid movie, this film has a good chance to open over 10 crores at the box office. It can even collect 12 to 13 crores on day 1 if this film gets good word of mouth.

The screen count details are yet unknown but it may release in 2700 screens to 3000 screens. Directed by Raj Kumar Gupta, this film stars Ajay Devgn and Ileana D’cruz in pivotal roles.

Altogether, Raid movie is all set to entertain the cinema fans from this Friday.

Watch also: These 3 Films Made Aamir Khan A Global Superstar