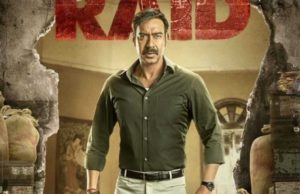 Raid movie has a strong first weekend at the box office, where it has earned 41.01 crores. It has wrapped up first week with an earning of 63.05 crores. It has earned 3.55 crores on eight day and it takes the total to 66.60 crores.
Interestingly, Hichki released on this Friday and able to collect only 3.30 crores. That shows that, Raid movie has a stronghold at the box office, even in the second Friday.

Raid movie has a strong chance to cross 90 crores in India and it may even touch 100 crores. Raid will face a tough clash with Baaghi 2 on March 30 and if this film will able to hold in third week at the box office than it will surely cross 100 crores.

This film is based on the real story of Raid, which took place in 1981 in Lucknow, Uttar Pradesh. This film also stars Saurabh Shukla and Ileana D’cruz in key roles.

Altogether, Raid movie is a good film with a fresh story.