Alia Bhatt starring Raazi has already won audience heart and confirmed as box office hit. It is now on its verge to cross 100 crores at the cinema halls in India.

Directed by Meghna Gulzar, this film has been well appreciated by Bollywood critics and fans. In the first week, Alia Bhatt’s film has collected 56.59 crores, followed by 35.04 crores. This film remains stable at the box office even after its clash with Hollywood film Deadpool 2 and 102 Not Out. Due to which, Raazi has crossed 91.63 crores in two weeks. 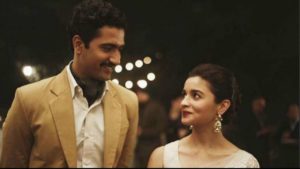 On the 14th day it has earned 3.15 crores, which is a good earning for a women-centric film. It is turning out to be the second female centric blockbuster film after Tanu Weds Manu Returns. Alia Bhatt, who has already polished her acting skills, is now set to rule the box office with her incredible act.

This film was being produced by Dharma Productions and Junglee Pictures. It also stars Soni Razdan, Rajit Kapoor, Jaideep Alhawat and many more. This is Meghna’s fifth directorial film after Talvar, Dus Kahaniyaan, Just Married and Filhaal.

Altogether, Raazi is all set to cross 100 crores mark by the end of its 17th day and become a blockbuster hit.