Priyanka Chopra, who was about to start shooting for Bharat movie, has left the project and plans to marry Nick Jonas, who is her rumoured boyfriend. Well, there is no official confirmation of it but Director Ali Abbas Zafar has spilled the beans in a style.

Recently, Priyanka has come to India to complete her work commitment for Bharat and other projects. Lately, she met Ali Abbas and confirmed that she won’t be a part of Bharat movie as she is planning something else. Well, Ali Abbas in his tweet said, “Yes Priyanka Chopra is no more part of @Bharat_TheFilm & and the reason is very very special, she told us in the Nick of time about her decision and we are very happy for her … Team Bharat wishes @priyankachopra loads of love & happiness for life.” 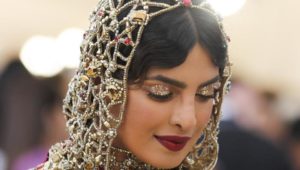 In his tweek, he mentioned the name of Nick in an indirect way, which is also the name of Priyanka’s boyfriend Nick Jonas, who is a singer and screen writer. Interestingly, Nick’s age is 25 and Priyanka age is 35. Well, nothing matters when it comes to true love!

Few weeks ago, Nick and PC was seen together in India where they met with Madhu Chopra, Priyanka’s mother. They even spend time in Goa together which also includes Parineeti Chopra.

Well, after knowing everythings about the two of them, it looks like they will soon announce their marriage in an official way. But we wish PC for her better future ahead.