The most anticipated film BEDAAD’s lead actor Aryan Vikal, its director Anil Ramchandra Sharma and Music Director Kaushal Mahavir launched the poster of BEDAAD at a hep resto-bar in Andheri this Thursday.

“BEDAAD means injustice or ‘Adharm’ being meted out to the protagonist of the film,” revealed Anil Ramchandra Sharma the Writer, Director and Producer-partner of this realistic thriller-drama. It is the story of an innocent young man’s quest for his past identity which interlock’s the story of a couple. “Therefore you will see that there are 2 stories merged in one,” adds Anil who makes his debut as a director in Bollywood. 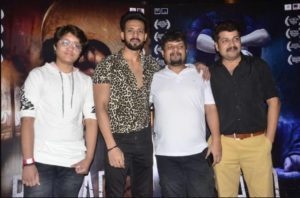 Anil Ramchandra Sharma has been in Mumbai since 1996, worked as an Assistant Director to Satish Kaushik, Anees Bazmi and then went on to direct several Television serials. Incidentaly BEDAAD is the first film to his writing credits.

“The film has 4 songs with each of the story forward. BEDAAD will initially appear to be a commercial film but as the story proceeds, the viewers will get the feel of its artistic reality,” added Anil who mentioned that the film has been travelling to several film festivals and the most critical response he has received was that ‘.. the film has a soul and will connect with everyone as most of us have experienced such a painful experience in a certain phase of our lives.’ 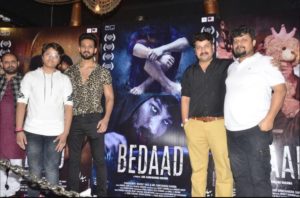 Lead actor Aryan Vikal talks about his character, “I play the psycho young man who is out to avenge the injustice meted out to him. It is such a delight to work in such a film particularly for one’s launch in Bollywood.”

Renowned young and bright Kaushal Mahavir, the music director reveals, “Sunidhi Chauhan has sung for 2 songs, while Mohit Chauhan for the title song. One of Sunidhiji’s rendition are a romantic song while the other is a situational one. Neelam Batra has sung for the item song which is sure to catch up with the party crowd. In all there are 3 songs in the film.”

Belonging to the Jaipur Gharana, Kaushal Mahavir has done music for several international films. “Each of the songs take the story forward with the Hard Rock number is a bang on with electric guitar and a rhythm that reflects the questioning note that is the essence of the film,” Kaushal mentioned.