Sandalwood’s highest grossing film KGF Chapter 1 is now all set to begin a whole new Chapter 2. To mark the beginning of Kolar Gold Fields 2 or KGF 2, the makers along with the star cast has reached to the  Kodandaram temple Vijayanagar today.

The makers did the muhurat shot today with the clapper  board and now we are about to witness a whole new saga in the  second part of the film. As, rightly said by Anant Nag at the end of the film, “This Is Just The Beginning.”

The  film stars rocking star Yash, Srinidhi Shetty, Malavika Avinash and many more. As we all know KGF has been made with a whopping budget of over 80 crores and it has earned over 200 crores. Well, this film will surely be much higher on the budget and the scale. This KGF2 film reportedly star actors like Sanjay Dutt and Raveena Tandon, though there is no official confirmation on the same. 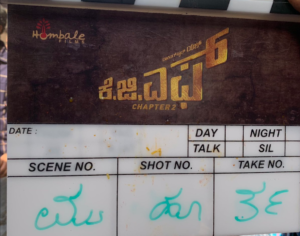 One thing which is sure here is, audience will get to see much more action, drama and emotions. This film reportedly going to release by the end of 2019 or the first half of 2020.