Justice League is an upcoming superhero Hollywood film which is releasing this Friday worldwide. It is also releasing in India along with four other Hindi movies Aksar 2, Tumhari Sulu, Panchlait and Dil Jo Na Keh Saka. Justice League will be directed by Zack Snyder. 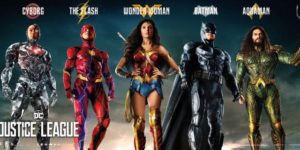 This film was announced in 2014 and the shooting started in April 2016. Justice League shooting ended in October 2016. This film was being made with a budget of $ 300 million (Rs. 1957 crores). This film has a big star cast starring Ben Affleck, Henry Cavill, Gal Gadot, Amy Adams, Ezra Miller, Jason Momoa, Ray Fisher and many more.

The story of this film is about Bruce Wayne, who makes a team with Diana Prince after the death of Superman. This team further extends to Barry Allen, Arthur Curry, and Victor Stone. How this team faces a new threat of Steppenwolf follows the whole story. This film includes 4,040 theaters which include 400 IMAX screens. This film is expected to earn over $150 million in first weekend 978 crores in the domestic market. In India too, Justice League can easily open with 9-10 crores on the first day.

Talking about the reviews, Justice League has received a mixed response from the film critics. It got average rating till now and this might affect its box office collection in the days to come.

Altogether, Justice League is set to release on November 17, 2017, worldwide.