Hollywood film Jumanji Welcome To The Jungle released in India on December 29, 2017. It has now completed 3 days and the collections are below average and the reason behind is none other than Tiger Zinda Hai. 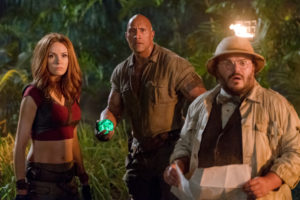 Due to a big film like Tiger Zinda Hai, Hollywood film Jumanji faces trouble to lure the audience at the cinema halls. Due to positive word of a mouth publicity, audience still make their way to theaters. On the first day, it has collected 4.11 crores, followed by 5.23 crores. The third day box office earning is 6.50 crores, which takes the first weekend total to 15.84 crores nett collection.

Directed by Jake Kasdan, this film has collected 20.27 crores gross collection in the first weekend. The earning is low due to big response of Tiger Zinda Hai, which still holds 3500 screens in the second week. On the other hand, Jumanji is hurting Salman’s film collections in a small way for sure.

Produced by Matt Tolmach and William Teitler, this film has met with good reviews in India and across the world. That has helped this film to earn good money at the box office. It is a sequel of 1995 classic film Jumanji. This film stars Dwayne Johnson,  Jack Black, Kevin Hart, Karen Gillan, Nick Jonas, and Bobby Cannavale in key roles.

Altogether, Jumanji Welcome To The Jungle will do stable collections in India in the weekdays.