Akshay Kumar’s first big release since Laxmii is coming directly in theaters on August 19, 2021. This will be the first big Bollywood film that is releasing in theaters after India entered lockdown phase since March 2020. And now, Bell Bottom is all set to put some smile on the faces of fans and even cinema theater owners. And the latest we heard that, Bell Bottom has been officially opened its advance booking in overseas market. 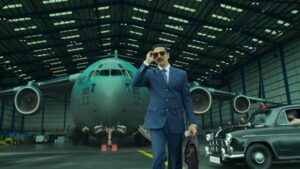 If we go by the latest report, Bell Bottom movie has been opened for its advance booking in UAE circuit. It will soon be open in other International markets like USA, Canada, Australia, New Zealand and Fiji.

Well, in UAE, Bell Bottom will released in Hindi language with English and Arabic subtitles. The tentative screen time of Bell Bottom movie is around 2 hours 10 minutes.

The early shows of Bell Bottom will open in UAE as early as 11 am, that means it is 9.30 pm as per Indian Standand Time, as India is 1 hours 30 minutes ahead of UAE. The last show in UAE is 12 am, which is in midnight. There are over 18 plus cinema theaters where Bell Bottom movie will release in UAE through Vox Cinemas.

VOX Cinemas has officially tweeted on August 10, “Inspired by true events. @AkshayKumar
stars in the upcoming Bollywood spy thriller, #BellBottom. Experience it ONLY on the big screen on 19 August. Book your advance tickets now at https://voxcinemas.info/3jCFAMj or the VOX app. #BellBottomatVOX #GreatMoments @MajidAlFuttaim.”

In India, Bell Bottom advance booking has still not opened yet. It might be opened by August 15, 2021, four days ahead of its release. Still, the big question here is, will Maharashtra theaters will be allowed to open till August 19 is something that only the state government knows.

Dispite 50 percent occupancy in several hindi circuits and almost no chance of Maharashtra release, the makers are still taking a big risk with Bell Bottom to be officially releasing on August 19, 2021. Directed by Ranjit M Tewari, this film has been produced by Pooja Entertainment. This film stars Lara Dutta, Vaani Kapoor and Huma Qureshi in key roles.