Who says Female Centric movies don’t work in India? well we have lot of examples here Raazi, Pari, Hichki and the latest Veere Di Wedding. Though, it got A-Rating from Censor Board but still people have loved this film. 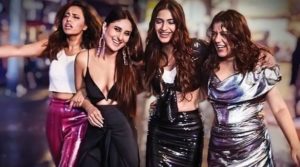 The content of this film has a shocking value which really adds up to the mark. The uniqueness about this film, is the four female centric characters whose lives were twisted like an entangled mobile-earphone. How their incomplete lifes put to challenge when they all met again after almost a decade, is what makes this story interesting.

Veere Di Wedding is being helmed by Shashanka Ghosh, who earlier helmed movies like Khoobsurat and Mumbai Cutting. Made with around 30 crores budget, this film has collected 10.70 crores on day 1. It has earned 12.25 crores on day 2 and followed by 13.57 crores on day 3. It takes the nett total collection to 36.52 crores.

As per 2018, Veere Di Wedding is fifth highest first weekend opener after Padmaavat, Bhaagi 2, Raid and Padman. This film has got great response from the Multiplexes audience and especially from female fans. The music of this film is foot-tapping that also made it a memorable movie. Though it has some slang and abusive dialogues, but overall its a good movie to watch. This film stars Kareena Kapoor Khan, Sonam Kapoor, Swara Bhaskar and Sikha Talsania.