One of the most awaited movies of 2017 is Tiger Zinda Hai, which is all set to hit the theaters on December 22, 2017. At first, the makers have released the first look of both Salman Khan and Katrina Kaif on Diwali 2017. Now, the makers have confirmed the release date of Tiger Zinda Hai Trailer which will be out on November 7, 2017. 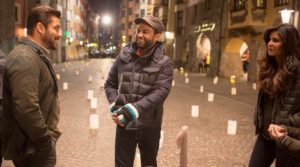 Tiger Zinda Hai shooting has started from April 2017 and now it has already completed. The shooting has been taking place in Austria, Greece and Abu Dhabi. It is one of the costliest films of Salman Khan, which also witness Katrina Kaif in the leading lady. They are coming back together after a hiatus of 5 years. The last time we saw them together in Ek Tha Tiger in 2012.

Tiger Zinda Hai is being helmed by Ali Abbas Zafar, who has earlier directed Sultan. As we know that Sultan has collected 300 crores at the box office. So, there are expectations that Tiger Zinda Hai will also follow the same line.

This film also stars Paresh Rawal and Girish Karnad in key roles. This film will be released just before the Christmas and New Year. So, there are big chances that it will cross 300 crores mark at the box office.