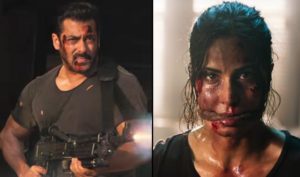 Directed by Ali Abbas Zafar, this trailer promises of high-octane action moves and larger than life visuals. This is a treat for all the Salman Khan fans across the world. This 3 minutes 14-second trailer gives us a glimpse of this movie.

You can see Helicopters, Trucks, and Cars falling in this epic trailer. On the other hand, you can see Salman riding a 4-wheel motorbike, car and a horse. You can also see Katrina Kaif in an action avatar. Here Katrina is essaying the same role of a Pakistani spy in this film. The tagline of this film is “There Will Be Peace.”

In this film, Salman is essaying the role of an Indian Agent, which is the same role he has essayed in Ek The Tiger, which released in 2012. He got a task to evacute 25 nurses in Iraq.

Altogether, Tiger Zinda Hai movie will be a blockbuster one.