Salman Khan film has a big day today as it is Sunday. This film has entered into 17th day and there are chances that this film could collect over 10 crores today. At the latest, the morning audience occupancy is out now, which is double than Yesterday’s occupancy. 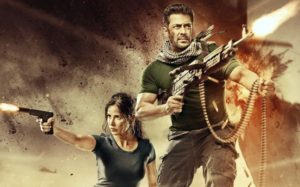 The afternoon occupancy will be over 50 percent for sure. The occupancy will cross 60 percent by evening and the same trend will be followed for the night too. In such a case, this film can easily cross 10 crores at the box office. If this thing happens, then the total collection will cross over 310 crores at the box office. Till now, Tiger Zinda Hai has earned 300 crores in 16 days.

Altogether, Tiger Zinda Hai opened strongly on the 17th day and the collections will be promising one.