Tiger Zinda Hai has completed its 13th day at the box office with an average response. The collections will surely drop down as compared to the 12th day and there are several factors to it. 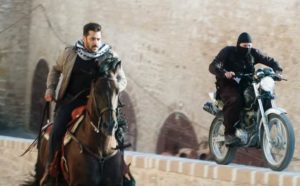 The afternoon audience occupancy was around 25 to 30 percent on the 13th day. The evening audience occupancy was 40 to 45 percent, which was much better as compare to morning and afternoon. This film will loose 1 Crores or more in Mumbai circuit today due to Bandh, as it is a big circuit. Even, the ticket price is also low, which also result in the low earning.

By knowing all these factors for Day 13, the collections will be around 5 crores to 6 crores. It can even touch 7 crores if the night shows occupancy gets better, which is not confirmed yet. Directed by Ali Abbas Zafar, this action film stars Salman Khan, Angad Bedi, Paresh Rawal, Katrina Kaif in key roles.

Altogether, Tiger Zinda Hai is inching closer to 300 crores club as it has already earned 282 crores in 12 days.

Watch also: Will Any Bollywood Films Beat Baahubali 2 In 2018?